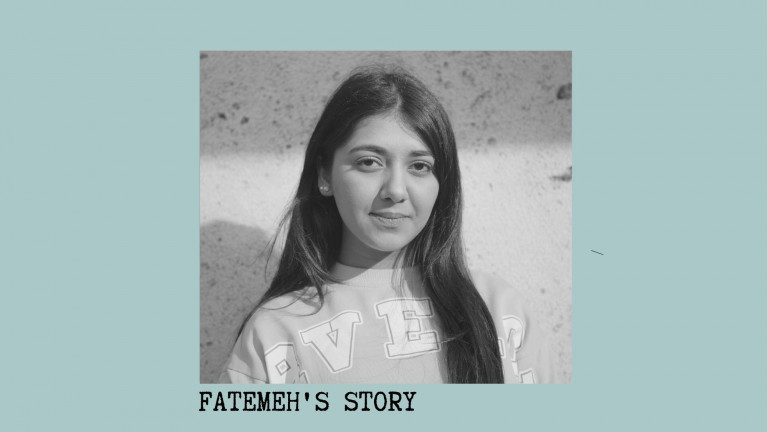 When Fatemeh thinks about her family’s journey to Germany, she is filled with gratitude. Gratitude for being alive, safe and well. Because none of these things is a given for her. This is her story:

Fatemeh grew up close to Herat, Afghanistan. She lived in a house in the countryside, together with her parents, two younger siblings and her grandparents. They were doing fine, but the security situation became worse and worse with time. The Tailban were ruling the region and suppressed the people. Fatemeh, being a girl, couldn’t go to school and wasn’t even allowed to leave the house without being accompanied by a male chaperone and covering her head and face. The situation escalated when a 40-year-old man started pressuring her parents to let him marry her. He was already married at that stage, and she was only eleven years old. There was no way her parents would comply, and so the man became very angry. He was related to the Taliban and very powerful in their village. He started harassing the family, threatening them, destroying their reputation and even violently attacked Fatemeh’s father. This went on for a couple of years until it eventually got so bad that the family decided: We can’t stay here. We don’t have a future here. “My parents wanted us kids to have every opportunity possible. But in Afghanistan all doors were closed and we lived a life of fear and uncertainty.”

Almost overnight they sold everything they had and fled to neighbouring Iran. Fatemeh was 13 years old at the time. But in Iran, afghani refugees were not registered and therefore didn’t have a working permit, nor access to education. After two years they heard about Europe welcoming refugees. With nothing keeping them in Iran, they decided to make their way there. And that was the beginning of a journey with so many stories, one could probably fill an entire book.

The first leg of the journey led them to Turkey. They were driven into the mountains together with ten people in a car meant for five and then travelled on foot and by horse through the mountains. Fatemeh still remembers being afraid for her life: “It was so scary. For the majority of the journey I thought we wouldn’t survive it. I remember how my little sister cried because she was so hungry, how we had to hide when we heard shots, how my mother and I fell off a horse, how almost all our things were stolen and how we were separated for a while.“

But they made it into Turkey and managed to get a place on a boat that would bring them to Greece. They left at night, in complete darkness. And again the family feared for their lives. The waves were high and the boat very small. When they reached the shore at dawn, the joy and gratitude was overwhelming. “Finally we were safe. I will never forget that feeling.”

But they couldn’t stay in Greece. Together with hundreds of other refugees they were transported to Mazedonia by bus and from there to Germany. After arriving in Berlin they were registered as asylum seekers and placed in an emergency shelter, an old tobacco factory in the north of Berlin. The place had been turned into a shelter for up to 1000 refugees overnight. The big hall was divided into different sleeping areas, each furnished with hundreds of bunk beds and nothing else, two areas for men and one for women and children, providing no privacy whatsoever.

The first few months were extremely difficult for Fatemeh and her family. They had to learn a new language, spent entire nights in front of administrative offices that weren’t able to cope with the situation, and experienced racism in buses and on trains. They had a roof over their heads, but not one that they felt at home under. Despite all this, the hardest thing for them was not knowing whether they would be able to stay in Germany or not.

Fatemeh still remembers that wonderful moment in the beginning of 2017, when they sat in their very own rental apartment, reading the letter that told them that they could stay. “When we found out that we were able to stay we were finally able to feel like we’d really come home. We were so relieved and could properly start adjusting to life here.“ To not only arrive physically, but also mentally changed a lot. She found friends and started doing really well at school. “I’m so grateful for the chance to live in an open-minded society, where as a woman, I have the same rights and opportunities as men. I don’t take that for granted.“ Fatemeh has decided not to wear her headscarf anymore that had been obligatory in Afghanistan and Iran. When she finishes school she wants to become a midwife.

The current situation of refugees trying to enter Europe from the south and being rejected with much hatred and even violence is very upsetting for her and brings back a lot of memories from her journey to Germany: „No one is fleeing without a reason. These people wouldn’t come here if they weren’t forced to. All they want is to live in safety. I don’t understand how anyone can treat people like that.“

Fatemeh is grateful to have found her home in Germany. She and her family are happy here and at the same time they feel for the people, the men, women and children who went through something similar, just without the happy ending. Her appeal to everyone seeing the pictures on the news: “See them as humans and not just as politics. And if you have the chance, support and pray for them. They need you.“